The Crusade for Vengeance

The Hunt for Power 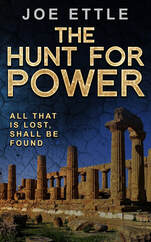 All he was trying to do was get home. But instead, Rex Fletcher is caught up in a dangerous race to unravel one of the oldest secrets of the world. With a motley group of companions, Rex must travel across Europe and stay one step of ahead of a megalomaniac intent on reshaping history in his image. Can Rex solve the clues, save an old friend's life, and rediscover what was once lost? Or will he be forced to watch as the power of the gods falls into the wrong hands?
Order here

Fall of 2023 - The Quest for Immortality

When a priceless artifact is stolen and Rex is framed for murder, he has no choice but to go on the lam to try and clear his name.  But who is the mastermind behind it all?